As the summer months come to a close, and our social calendars start to wind down a bit, I finally found time to write about my road trip to LA with my brother! My Summer was pretty filled with travel, and kicked off with a girls trip to Tennessee, followed by several weekends up north, and ending with an exciting cross country drive.

I know A three-day trek to the LA sounds beyond exhausting (and it was!), but my brother and I hit up some fun spots along the way and really made the most fo our time together. We actually drove our to California because I was helping him move! So while this was a fun brother/sister road trip, we had the car jam-packed with all of my brother’s possessions and one backpack for my travel essentials.

We started our 3-day trip from Chicago at 4am, and we headed south and then went west through Iowa and Nebraska. We took a little bit of an unconventional route, since we wanted to stop by some family friends, and stay in cities that weren’t in the middle of nowhere. We ended up driving about 12.5 hours on the first day, 7.5 the second, and 9.5 on our final day driving into Los Angeles.

Surprisingly, the first day really wasn’t bad, and we were very happy to get the longest stretch out of the way! But by the third day of driving, we were very ready to be out of the car.

We decided to stay with a family friend during our trip so we could save some money on hotels, and feel more at home in a faraway place. The only unfortunate thing about this, was the fact that Harrisburg is on the western tip of Nebraska. So, this made our first day of driving very long! We left at 4am, so we could get there by about 7pm (with making pit stops and changing drivers along the way). It was nice to get the longest leg of our trip out of the way on the first day, and starting early really helped the drive seem shorter, because by 9am we had already been on the road for 5 hours, haha!

On the way, we stopped in Lincoln, NE for some lunch and to stretch our legs. There was a little art fair going on downtown, so we braved the sweltering heat and walked around for a little bit before getting lunch. We found a great looking place on trip advisor called Screamers Dining & Cabaret, and it was so much fun! We enjoyed live performances while we quickly ate our lunch before getting back on the road.

Our second overnight stop of our trip! We found an adorable Airbnb that was the Historic Baldwin Radio Factory, which produced the world’s first headphones. It had a record player and a bunch of old records to listen to, and it was a quick drive into downtown. Once we were settled, we decided to explore the downtown a little and walked through Temple Square, before riding scooters to dinner at White Horse.

After dinner, we headed back to our Airbnb and set our alarms for 5am. We had a big day ahead of us and were excited for our final day of driving (and to get Steve to his new apartment)!

Before heading out in the morning, we drove to the Great Salt Lake just outside the city just after sunrise to dip our toes in and take in the scenery. It was a quick stop, but we were glad we took the little bit of extra effort to make it happen. We hung out for a half hour or so, and then we set off for California!

This was our final stop before getting to LA! While I had already been to Vegas, It was Steve’s first time. So i told him we had to at least walk to strip for a bit and see a few hotels. He was a bit reluctant, since (like me) he knew Vegas wouldn’t really be his “thing,” but I think we both enjoyed being able to see it together.

We parked for free at Treasure Island and walked through a few hotels, and got lost in the pool courtyard at the Bellagio, before we lost $1 at the slots and headed back in the desert heat. A quick trip, but worth it just to say we stopped for a bit.

We then tackled the last leg of our drive and made it to LA around 6pm.We unpacked the car, and had some pizza while we unpacked the essentials before turning in. Our cross country road trip was finally done and we were happy to be out of the car and even more happy to be in sunny California!

Stay tuned for what I did during my time in LA before flying back home! Want to see even more of our trip? Head over to my Instagram and watch my Los Angeles Highlight.

One thought on “Road Trip to LA”

This site uses Akismet to reduce spam. Learn how your comment data is processed. 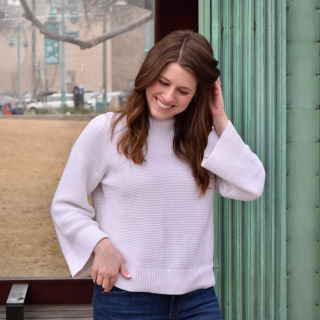 Hi there! My name is Kelly, and I'm the face behind Passports & Cappuccinos. Love traveling? Food? Puppies? We'll get along just fine. I hope you stop by again soon!

“I have always said, you are the most enthusiast

I know everyone says January feels like it lasts f

We’re back in Wisconsin after 5 days in Mexico w