I feel like I haven’t talked about travel in a while on the blog, so I wanted to share a fun trip that Brian and I decided to take on a whim! Just about a year ago, we drove down to St. Louis for a little adventure when I was in-between jobs.

We wanted to be able to go somewhere quick/within driving distance of Milwaukee, so we booked an Airbnb, and hoped in the car! (Probably the least we’ve ever thought about traveling anywhere, which was actually kind of exciting!)

One the way, we looked up where we could go and what fun things we could see during our 48 hours in a new city. And to our surprise, there was a lot to do!

A Night Out in Ballpark Village

After arriving at our Airbnb, and decided to hit the town for some refreshments and exploring. We started with dinner and drinks at Three Sixty, a bar with (you guessed it) 360 views of the whole city. We enjoyed a small dinner and our drinks while walking around, seeing the city from above. The manager even let us step outside onto their balcony, even though it was freezing out. It had great views of the Arch and Busch Stadium, and after seeing it all from above, we were really excited to check out the rest of the city.

After our drinks, we headed to Ballpark Village. This was a newer part of Busch Stadium, and it was pretty cool. It was filled with restaurants, bars, and rooftop seats to watch the game from across the street. It was hard not to be a little enamored with the space. Even though it felt like they were knocking off Wrigley’s rooftops 😉

The next morning, we ventured to the City Museum where we wandered for hours. If you’re ever in St. Louis, this place is a must see! We got there early to try to get ahead of the crowds, but we still had to wait in line for tickets. And even though it was crawling with people, it was still one of the coolest “museums” we’d ever been to.

Everything was very interactive, with small pathways and things to climb on and into. They even had a huge slide that kids AND adults could do down.

It was filled with old pieces from buildings, like a safe and letter presses. It even had arcade games and a little train! All around, a pretty indescribable place and the perfect way to start our day.

After the City Museum, we had some lunch at Rosalita’s Cantina, which ended up having great Mexican cuisine (thanks Trip Advisor!), before heading to the famous Gateway Arch.

Getting to the top was quiet and adventure! You are seated in little pod shaped elevators that tilt with the arch as you go up. Once you reach the top, you are free to stay as long as you want and take pictures. It’s pretty tight at the top, so we didn’t stay long. But, it was still really neat to see the city from one side, and Illinois on the other.

After a quick break to warm up at our Airbnb, we decided to go to dinner and explore The Union Station Hotel. The space was huge, and utterly breathtaking. I could have probably spent all night there just starting at the ceilings and the amazing architecture. It had multiple venue spaces, restaurants and lounge area, in addition to the luxury hotel that was attached.

We walked around, took some pictures, and hung out in one of the open areas for a while. And once we were done exploring, we headed to Schlafly for a drink before turning in. It was a pretty jam-packed day, so we split a flight of local brews and headed back to our apartment.

Before we journeyed home, we made one final stop at the famous Budweiser Brewery. (We originally planned to visit the brewery the day before, but 5 minutes into our tour the fire alarms went off and they shut everything down!) Eager to continue our tour, we arrived the next morning ready to walk the grounds.

My favorite part was seeing the Budweiser Clydesdales and their stables. Everything was decorated for Christmas, so it was very festive and magical. The whole campus was covered in lights for their annual lights festival as we walked through. In addition to the stables, all of the buildings were stunning! Even if you’re not a huge fan of beer (which I am not), it is still a must see if you’re in the area.

Packing up the car for a quick trip was so much fun, and sometimes it’s nice to not have every moment planned for a trip. Anyone else travel somewhere on a whim? Where did you go?

This site uses Akismet to reduce spam. Learn how your comment data is processed. 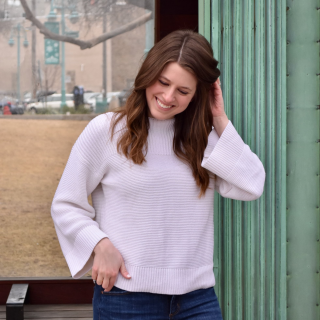 Hi there! My name is Kelly, and I'm the face behind Passports & Cappuccinos. Love traveling? Food? Puppies? We'll get along just fine. I hope you stop by again soon!

Almost ready for decorating!! 🥰💙 Truth be to

Hi! I noticed some new faces on here this week, so

Pumpkin spice and everything nice 🤤🎃 Made a

So so so excited that this day is finally here!! I

If you tuned in to the blog yesterday, you saw tha

Our First House-iversary | An Updated Tour